Of sketches, comics, and plot dissections
Leave a comment

Blog Update #5: (Apparently I ran out of silly titles. Oops.)

A new year means new beginnings, and what better reason to kickstart some new articles?

END_OF_DOCUMENT_TOKEN_TO_BE_REPLACED

Hey all! Holly here, back from the dead just in time for 2014’s Hourly Comic Day!

Once again, apologies all around for the lack of updates. I know that 6+ months is a long wait and leans more on the side of hiatus than break time, but I want you guys to know that I have no intention whatsoever of giving up on this blog. The first half of junior year was pretty busy for me, but I should have a better grip on things now.

In fact, a couple of classes actually helped me come up with some new ideas for this blog. Keep an eye on this blog over the next couple of days for an update regarding that.

For now, here are the goodies that you came for!

UPS Is a Wonderful Thing

Posted by Holly A. Wolfe on August 6, 2013 in Uncategorized

Do you know why? Four words: Tales of Xillia, baby!

I swear, if it was humanly possible, I’d be ricocheting off the walls right now.

Since I pre-ordered my copy, I received a couple of extra goodies, such as a CD and an art book, as can be seen below.

The game also came with a code for two character costumes exclusive to the limited and collector’s editions. I’d show it, but displaying a line of numbers and letters just isn’t the same, is it? Oh, I almost forgot to mention the best part: it comes with a free box. 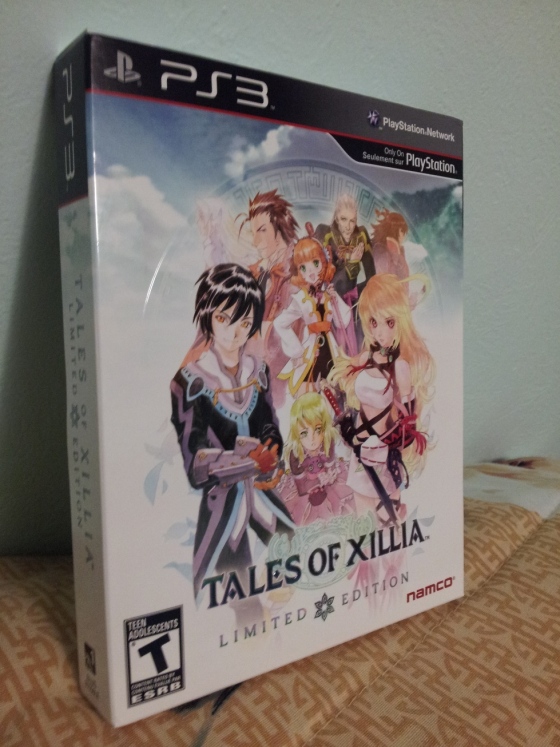 All snarking aside, sorry if I am coming off as a total a show off to fellow fans in Europe. I’m not trying to be a braggart. I’m just really excited to finally have this game and can’t wait for everyone to play it. (Which I haven’t actually done yet; I’ve been too busy squealing out loud and thanking God that no one is home to witness my extreme geek-out.) I’ll be back on Thursday with another FMA 2003 post. Until then, I’m gonna play me some Tales! The Nostalgia Critic © Doug Walker Tales of Xillia © Namco Bandai

A Brotherhood Fan Watches FMA 2003, Episode 1: To Challenge the Sun

Posted by Holly A. Wolfe on July 27, 2013 in Other Reviews and Commentary

If I had remembered what watching this show is like, I would have returned to it a lot sooner.

The first episode of Fullmetal Alchemist had me feeling like I was a middleschooler again, fresh meat in the anime fandom and looking for more mature, complex shows than Saturday morning TV could provide. Now I remember why this episode blew my mind.

Fullmetal Alchemist (which I will call FMA 2003 from now on to avoid confusion) eases us into the series with the episode “To Challenge the Sun.” This episode does everything that a series’s first episode should do. It gives viewers a good first taste of the series that has everybody rushing back for seconds. And what is that taste exactly? A rich flavor of perfect pacing and character defining scenes that encourages you to sit back and savor what you are experiencing. (…Why the food allegories?)

I can’t go into everything this episode does. That would take all day. For now, let’s examine the reveal of the Elric brothers’ physical conditions and the visual style of FMA 2003.

END_OF_DOCUMENT_TOKEN_TO_BE_REPLACED

Something a Little Different

A few weeks ago, I started pondering to myself.

Pondering how to keep new ideas for blog posts coming. Pondering what I should do when, due to a busy schedule or something else, I don’t have a solid art piece or in-depth article ready for a weekly post.

And then I remembered Doug Walker’s Avatar: The Last Airbender vlogs.

For over a month and a half, Doug Walker, one of my favorite internet movie critics, has been catching up on the Avatar series and discussing what he enjoys and dislikes about each episode. I began watching Avatar along with Doug for as long as I could before I inevitably fell far behind his vlogs and gave up.

This got me to thinking about another TV series that I had started watching years ago yet completely neglected to finish.

I know, I know, I must be a heretic for snubbing one of the great anime classics. Allow me to put things in perspective before everybody grabs their torches and pitchforks.

When the original Fullmetal Alchemist anime started airing in the United States, I was a middle schooler stuck in rural Nebraska. I didn’t have ready access to cable or Dish, and Funimation was far from releasing episodes online at that point in time. Needless to say, my chances to view any quality anime were limited. I don’t know how many episodes I managed to see, but they weren’t many.

Then 2010 came along and threw a new obstacle between me and FMA 2003: Fullmetal Alchemist: Brotherhood. Critics and fans everywhere couldn’t stop gushing about Brotherhood, praising it for being a faithful adaptation of the manga and being a new anime great. So I did what any anime fan would do: start watching it on Netflix and promptly ask for the DVD sets for Christmas.

Loving Brotherhood as much as I did, I wasn’t very keen on returning to the first adaptation and seeing all the changes that it made. However, people such as Hope Chapman (AKA JesuOtaku) still proclaim this to be their favorite of the two series and say that it still holds up as a standalone show.

That’s why I’ve finally decided to go back and give this anime another look.

I’m going to take a look at each episode of Fullmetal Alchemist and do a sort of commentary on it, discussing what works and what doesn’t. Comparing and contrasting FMA 2003 and Brotherhood at certain points will be inevitable, but I won’t blow off plot elements for not staying true to the manga. Needless to say, spoilers for both series will abound, so watch yourself if you are in the remaining one percent that has no idea what happens in either of them.

I intend to write one episode post per week, and I already have a bit of a head start, having taken notes on the first two episodes. I hope that you will come along for the ride. I have a feeling it’s going to be a doozy!

Now to give this miniseries a name that reeks of dignity and doesn’t totally suck. 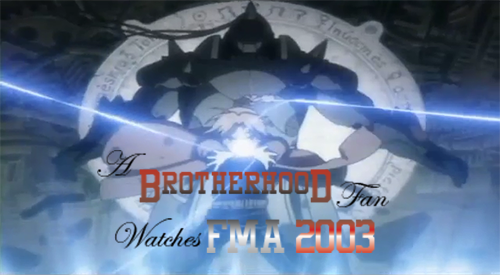 Staubach font by Abdulmakesfonts on dafont.com

Well, here I am, back like I said I’d be! Let’s drop the formalities for once and cut to the chase, shall we?

This will be the last time I use this image for a while. For better or worse.

END_OF_DOCUMENT_TOKEN_TO_BE_REPLACED

Posted by Holly A. Wolfe on July 2, 2013 in Uncategorized

Honestly, I’ve about got the art of blog writer disappearance down to a T now. Once I master this mysterious art, I’ll be able to disappear for months, even years at a time!

Eh, on second thought, maybe some things are better off unlearned.

I’m sorry for missing last week’s post, but you see, it’s hard to make a post of decent quality when one’s laptop is in the shop awaiting a replacement fan. It’s even harder when said replacement fan decides to go sightseeing in China for a while. My baby is finally back, though, and in tiptop condition again.

Just in time for me to go to Iowa for a cousin’s wedding.

…Have I mentioned that my summer has been ridiculously busy so far?

If it’s any consolation, I have a few rough sketches ready for next week’s post. I’ll also give a much needed update regarding the statuses of my comic projects at that time.

Until then, stay safe and artsy!

On the Road Again

Unoriginal title aside, yes, I’m going to be absent much of next week. I’m going on a trip with my dad and the grandfolks to Missouri, and it’s going to be grrreat!

(Hm. A bit of my inner Tony the Tiger came out right there.)

Anyway,  the point of the matter is that there may not be a post next week. Just too much going on.

That, and I think Mom broke me with her tirade over the evils of granny shorts.

Have a nice weekend, everyone!

And the Daily “LOLWUT” Award Goes To…

Posted by Holly A. Wolfe on June 9, 2013 in Other Reviews and Commentary

Last week, my family was busy rummaging through every nook and cranny in preparation for the first garage sale we’ve had in a while.

At one point, I found myself in charge of sticker detail and consequently came across this little gem. 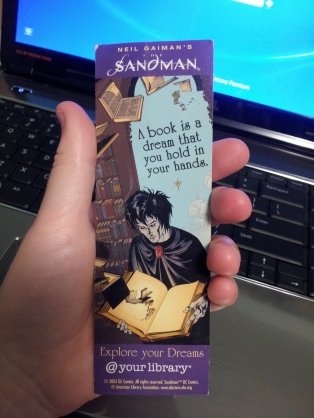 …Let’s make sure we’re on the same page here.

The American Library Association, once upon a time, decided to use Neil Gaiman’s The Sandman to advocate the importance of reading. Fair enough.

Many high-browed critics still laugh at the notion that comics can be considered engaging and challenging literature, but those of us who have read titles such as Persepolis and Maus know better. There is nothing wrong with using well-written, well-drawn graphic novels to encourage people to read.

I haven’t had the chance to read any volumes of The Sandman as of yet, but I do know that while The Sandman is many things, kid-friendly definitely isn’t one of them.

Seriously, what was the ALA thinking? Did someone just flip through some random pages, find an image with the main character surrounded by books, and send it off for editing without considering the comic’s target audience? What if a hapless kid had realized, “Oh hey, this is actually a picture from a book! This looks cool, I wanna read this Neil Gaiman Sandman thing!”

Ah well, I suppose it could have been worse; the ALA could have gotten the rights to use Alan Moore’s characters instead.

Instead of Dream, we could have be graced with Rorschach on our bookmarks, smiling and praising books for completely changing his view of the world. While petting a German Shepherd.

Heh. Someone should draw that.

Productivity? The Heck Is That?

Well, I wanted to get things done today. Clear my room of more junk, draw something good, run in to Walmart to fix my new glasses so I’ll be able to look at things without getting a headache, little things like that.

So of course my Friday basically said this to me:

“Aw, you’re cute when you’re stupid! Have another FAFSA form!”

Yeah, sorry, no in-depth articles are happening today. Instead, here’s a rough sketch I drew of the Tenth Doctor. It’s far from perfect, but in my defense, David Tennant’s hair has a life of its own.

You can view a little more of my commentary if you click on the image and follow the link to my deviantART page.

If you enjoy reading, that is. Who does that anymore?